Here are some new and some old missing locations. I will do my best to keep this page updated, putting any new entries on the top.

In each entry I’ve included a key frame from the film (don’t forget you can CLICK TO ENLARGE) as well as a link to a movie clip (in bolded red).

I was able to identify all the locations in this montage except for the hotdog scene. The first two scenes were shot in Tribeca — one on Reade Street and one on West Broadway. The dog walking was shot on Park Ave and E 68th Street. I guess the biggest clue to figure out the hotdog location would be identifying that office building. Maybe it was also near Tribeca but could be anywhere else. 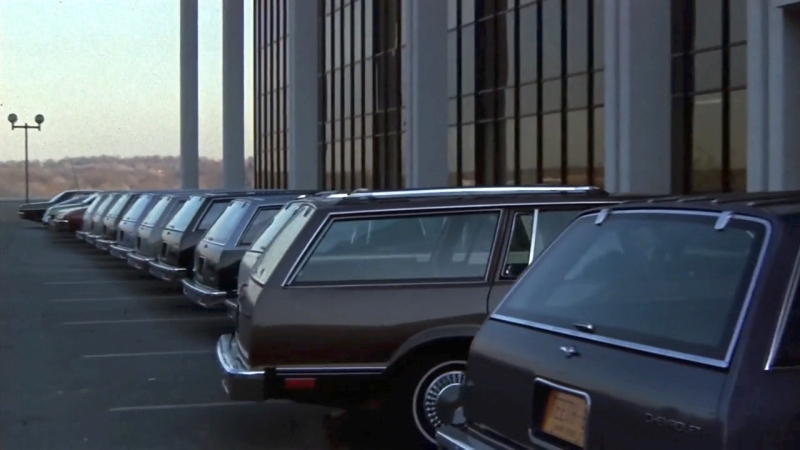 They shot some stuff in Sunnyside Queens (for example, the shot used with the costumes credit), and I believe they shot the “gun store” scene in Farmingdale, Long Island. I would guess this was filmed somewhere in outer Queens or Long Island.

So I found pretty much every location from this film except this one apartment building. There seems to be some conflicting indicators of where it’s supposed to be. A letter implies the character’s apartment is at 3 E 61st, but that doesn’t seem to make sense. (The current apartment building on that lot was constructed in 1979, and it looks like only small townhouses occupied the spot before.)

In the two scenes that take place in the front of the building, you can see an address of “427,” but we are pretty sure it was shot on a studio backlot. (The fact the camera always points towards the facades and that there is no evidence of a “REED & BLAIR” in NYC seems to support this idea.)

Regardless of whether the front is fake or not, the back (or side) of the building definitely looks real (at least in the wide shot above). But aside from apartment numbers on the garbage cans, there doesn’t seem to be any obvious clues. By the looks of the building, I’d say it was probably constructed in the 1940s or 1950s. (I’m wondering if someone ever created a color-coded map of NYC that shows building ages.)

Although all principal photography was done in Hollywood, this movie has some quite fantastic second-unit shots that were taken on location in NYC, using body doubles when necessary. We found all locations except for two of the cleaners featured in this montage. In particular, looking for Kent Cleaners.

I added a video montage of all the missing locations (at least the ones I’m looking for) left from this film. Reports have indicated that production filmed all over NYC and the outlying area, with a lot of stuff filmed in Brooklyn and Queens.

Although not created by me, this map from a movie-locations webpage shows a lot of the sites that have been already identified. I have found a few more, but the bulk of the locations were sourced from this website. You can see how vast the location shooting was.

In addition, I found another website that listed locations identified by fans while production was in the process of filming (e.g., late-2017/early-2018 for the Irishman), and seemed to be very generic area identifications, usually based on permit signs posted on the street. A lot of them overlapped with the map above, but some of them seem to be unique. I’ve listed all the ones I found on that website that don’t match any locations in the map above just to offer up some additional areas to possibly investigate.

Honestly, I’m not super geared-up to find these locations, as I have mixed feelings about the the greatness of the film, and I predict a portion of them will be identified by other folks at some point down the line. But of all the places I’d like to find are the opening residential home (which was supposedly filmed in Great Neck), the quick explosion shot, and “Otto’s Garage” at the end of the montage.

I Paint Houses (and Do a Little Yard Work)

Most of these are kind of pointless. They’re so dark and unclear that finding the locations will be nearly impossible. Plus the fact, they’re not very interesting. But I’ve included a few that kind of intrigued me. 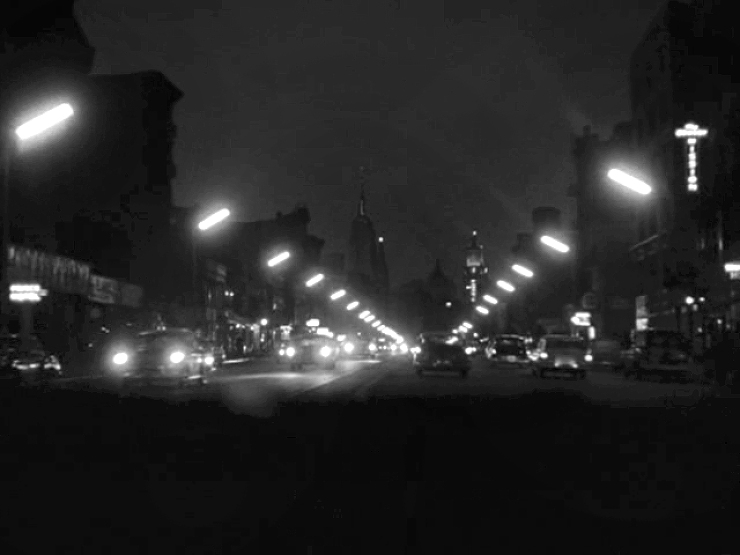 By the looks of the skyline, we’ve determined it to be on Bowery. Of course, then the question would be… where on Bowery? Might be impossible to find since it’s so dark and unclear. I could check tax pics, hoping to spot a “cross” neon sign that matches the one on the right in the above picture.

Driving Towards the Skyline

The one big clue is the Gulf gas station (which appears to be next to an Esso station).

I looked up both Gulf and Esso in the white and yellow pages from 1958, but neither directory listed many locations. (I’ve actually found that gas stations seldom had exhaustive listings in the phonebooks back then.)

My first guess is that they used the exterior of the actual city morgue on the southeast corner of 1st and and E 29th Street. But still haven’t found any definitive proof. I would love to find an old photo of the morgue, which you’d think exists somewhere.

Been trying to find either of the tunnels Noonan drives through in this sequence. Haven’t had any luck yet, so I thought I’d throw it up on this page.

I know this was in Vancouver but I’m still keen to find this location. It might be a set, but I don’t think so. Pretty sure they shot everything on real locations. But I do have a feeling that most of the elements (those metal staircases and pedestrian overpasses) are gone today.

I thought that “Columbia” might be a clue, but it didn’t give me any help. Do you think that’s a hotel?

Haven’t found this location yet and is basically the last missing one from tis film. This is from the first scene of an extended sequence. Later on, the trucks are seen driving through DUMBO and then end up in the Brooklyn Navy Yards. So, they probably shot this scene in same general area, but it’s not definite.

Some of the buildings seen here might now gone, but it’s hard to tell. Looks like some sort of factory there. 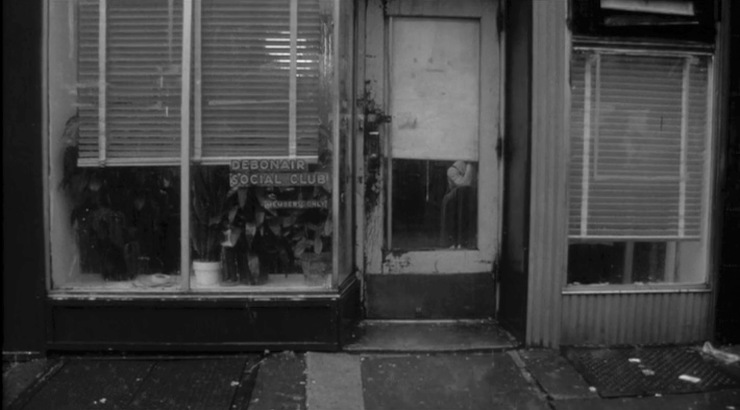 I figure this was probably shot in Little Italy somewhere, but I suppose it could have been shot in the East Village… or perhaps… shutter to think… on a set.

I know Scorsese did shoot a portion of the film back in Hollywood (in particular, the boxing arena scenes), so I thought it’s possible they shot this on a back lot and added the rain to help mask the fact they were in sunny California. (Same deal as that one scene in “The Lonely Guy.”)

I might go to Little Italy at some point and ask any old timers if they recognize the place or remember Scorsese shooting the film in the neighborhood.

This quick scene of Jake and Vickie arguing is the only other missing location from this film, which I believe was actually shot in the Bronx. There’s a little bit of “home movie” footage at the top of this clip which took place at 1829 Tenbroeck Ave in the Bronx. According to a local real estate company, another scene was shot on Tenbroeck near Astor Ave, but I couldn’t find anything that matched the film.

But that being said, I suppose it is possible they shot this in Queens or something, but doubling as the Bronx. 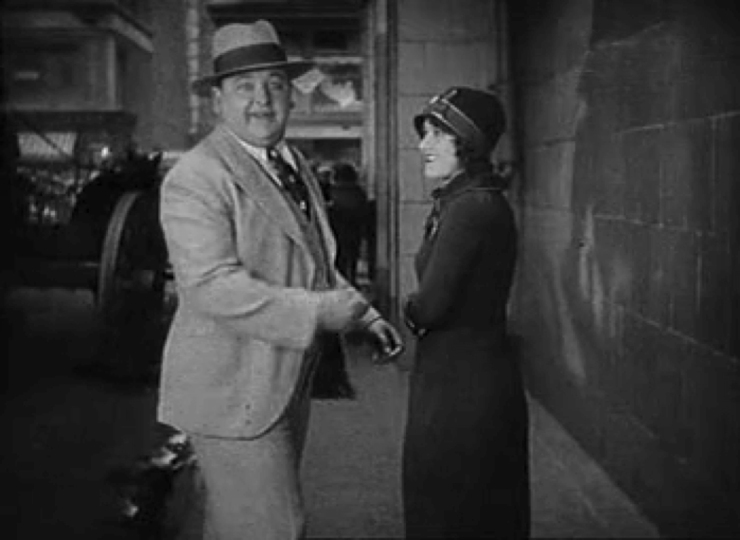 A lot of this sequence has been identified, but there are still a few missing pieces. The top of this sequence takes place at 37th St and 5th Avenue, but the part where the two men first meet their two dates is still unidentified. (See pic above.) Might be impossible to figure out unless we get lucky..

After they run to the bus, we get a quick shot looking up at a building on 42nd St near 5th Ave. The next shot of Mary going up the bus stairs is still missing.

Once they are all on the top of the bus, the action switches to downtown LA on 7th Street near Flower. It appears to stay in LA until the clown appears, then the acton switches to 8 W 57th Street in NYC. I do not know where the reverse shot of Bert takes place, but I believe it was shot in NYC as well.

The next two quick shots of John and Mary jumps to two different locations (both of which I believe are still in NYC). One of them is most likely on 5th Avenue as there is one of those unique traffic towers in the background.

The action then switches to a park, which I believe is Madison Sq Park on the 5th Avenue side. The lampposts look like the kind that were on 5th Ave at the time, plus the extra wide street seems to match where 5th and Broadway intersect around 24th Street. Haven’t found definitive proof, but Madison Sq Park seems like the most likely candidate.

The sequence finally ends with one long take on 57th Street, as they travel west from 5th to 6th Avenue.

Part of this scene (where you can see the El in he background) was shot near 427 W 19th Street. However, I haven’t figured out where they shot the part where kids run across the street (in front of that building with a big arched entrance, which as far as I can tell, does not seem to have existed on 19th street). I’m pretty sure the shots of the Simms looking out the window was done on a studio backlot, but not sure if the kids running across the street was done on-location or at a studio, although the sort of gallimaufry of building styles seems to be something they’d do on a Hollywood set.

So, I think this might be a backlot, mainly because there’s a T-intersection in background and you never see more than one block in background. The “for rent” sign looks somewhat authentic and not something seen on a backlot, but it could just be an item added by a detail-oriented King Vidor.

Missing this haberdashery that precedes the beauty salon. Probably impossible to find. That might be the name on window above door but pretty illegible (I reversed image above).

Looks like a bank lobby at the end of this sequence. I searched a bunch of images of “NYC bank lobbies” in Google (not Bing) but couldn’t find a match.

I’m not really interested in finding these locations, since Times Square is more or less unrecognizable today. But I thought I’d share this video in case there are any stores/theaters that appear to be readily identifiable.

The Days Before SpongeBob Squarepants

Okay, I have a strong suspicion this was shot on a studio backlot. But perhaps not.

In the dialogue, they claim this was on Park Avenue, but the building at no. 19 —which has a construction date of 1924— doesn’t match what’s in the film.

Buying From a Boy