Generally speaking, I try not to publish a post about a movie until I think I’ve found every possible filming location for it. But every once in a while, a new discovery pops up afterwards, and I am pleased that one has popped up for “The Wrong Man.”

I’m putting this new location in this quick update post, but I’ve also added it to my main post on the film so there’s proper context as to where the location shows up in the storyline.

Looking For a Witness on the Waterfront

This was obviously shot in some waterfront area in NYC, but the question was — where? The one big clue was the ship in the background. My hope was to figure out the name of the vessel, then figure out if it regularly moored at a particular pier.

Unable to read what the name said on the side of the ship, I enlisted Blakeslee’s help, as he is quite deft at deciphering blurry or incomplete words. After a little studying of a zoomed-in frame from the film, he concluded it was the SS Kathryn (originally a military cargo ship, called the USS Duplin). After a little digging around, we discovered that that ship’s regular port was at the “Brooklyn Piers,” in particular, Pier C, which was in the Gowanus Bay area. 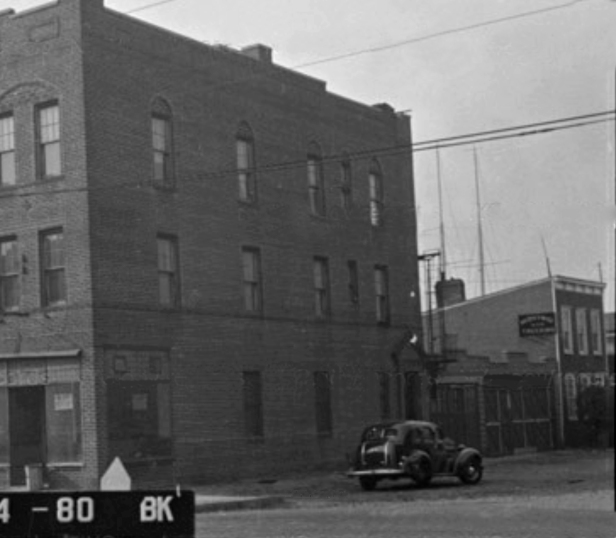 From there, it was off to the New York City Municipal Archives in search of any tax photos from the area. Figuring Fonda and Miles entered a multi-story building, it didn’t take too much searching before we focused in on 704 3rd Avenue on the corner of 22nd Street. Next to that building were a series of stables/garages which clearly matched what was seen in the film.

What’s interesting is that I originally thought this scene took place in Manhattan near the South Street Seaport, mainly because I thought I saw either the Brooklyn or Manhattan Bridge in the background (appearing between the ship and the building they go into). Turns out it was just some generic derricks or whatnot off the pier.

Sadly, most of the buildings from the scene are long gone, but the building at 40 22nd Street is still standing. (It’s pretty much the last building on the block with a pointy top.) Also, as far as I can tell, the large hanger-like buildings on 21st Street (which are partially visible on the right side of the frame at the top of this scene) have also survived.

As to the ship, after serving in World War II, the large cargo vessel was decommissioned by the Navy in 1946 and sold into merchant service, where its name was changed from USS Duplin to SS Kathryn. It then spent several years working out of the piers seen in this film. After being bought and sold several times throughout the 1960s (as well as being renamed at least two more times), the ship was finally scrapped in January of 1971.

A personal exploration of autism from a brother’s perspective, including family relationships, philosophy, neuroscience, mental health history and ethics

Your definitive source to filming locations and all things Hollywood!

Chronicling an ever-changing city through faded and forgotten artifacts

Reading Every Issue of The New Yorker Magazine

An eclectic mix of erotica.

A non-spoilerific guide to classic movies

The podcast devoted to Old Hollywood

. . where the worlds of film noir and pre-code collide . .

The Wonderful World of Cinema

Where classic films are very much alive! It's Wonderful!